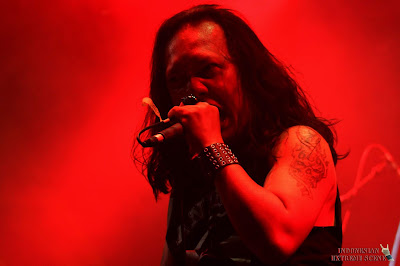 Someone also known Doni Herdaru Tona as Doni Iblis (Doni The Devil), is one of the phenomenal metal vocalist in Indonesia. Funeral inception, one of his death metal bands, and was officially established in may 2002. Previously, Doni, Mithos (Vallendusk) and Rio R.I.P. (Rottrevore Records), were bandmates Bloody Gore. Then they recruited Pandi from ‘Sadistis’ to form Funeral Inception. About exploring music and new concept. The name of Funeral Inception was picked when the album ‘Anthems Of Disenchatment’ (2002) was released, by a label from France. Yep, Warpath Records, art and logo by Jaromir Bezruc (Czech).
Not only death metal music, Doni Herdaru has a big influence on the balance of animal population. Especially dogs and cats. Although he has not inspired the entire earth, but he deserves appreciation for what he has done. Moreover, one of the greatest appreciation for him is to go his right path.
The replacement of members and the change of music styles, are adusted to suit the capacity of the members. The correlation between animal defenders indonesia and other concerns in social life phenomena, followed by lyrics sung by doni in his band. Implicit and explicit meaning, and the concept of musicality, become a complete unity in his life principle.
Beside Garry Betrayer and AA Vomitology. There are other former members of Funeral Inception. They are Nyoman Bije (Hellcrust), Adhytia Perkasa (Siksa Kubur), and Alan Musyfia (Hellcrust). The replacement of members is like the law of nature and it is unexpected in a band. For doni, it is a challenge.
It is undeniable, Doni Herdaru with the nickname Doni Iblis (Doni The Devil) was already formed long time ago. It started when he read ‘satanic bible’ because of his concern about a faith. He spoke loudly and uncontrollably, liked to criticize many things, and doni iblis is never separated from his character.
Surga Di Bawah Telapak Kaki Anjing (‘Heaven Under Dog’s Feet’) songs, caused pros and cons among metalheads and public. Satire, hyperbolic, socio-cultural and religious, issue and political criticism. It’s easy to find it in lyrics. But, after some attacks, doni answered on facebook. From different opinions, and different perspectives from other people. Doni said that the lyrics was a socio-religious criticism about issues at that time. The main point was “violence is not solution.” 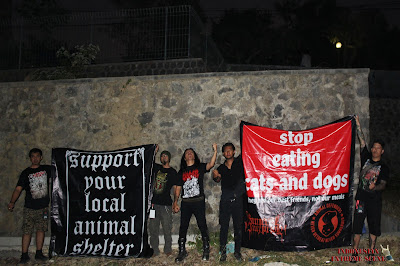 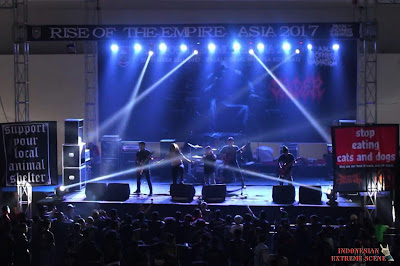 An animal lover since his childhood, he took care of a cat when he was a teenager, it continued before 2010 in his boarding house. A long process until now. What happens in his life, is not instant. Up and down, he has gone through it with his guerrilla and militancy. In april 2011, Doni established Animal Defenders with some of his friends.from fellow animal lovers, and bandmates, Animal Defenders Indonesia is independent. To take care of abandoned animals. Their physical conditions need our contribution and help. The fluctuation of popularity is a part of struggle. Preferring to handle anything by himself, Doni said that he’s helped by his team in Animal Defenders Indonesia since its foundation.
Many cases, will be more easily handled by a team, than by an individual. Many reports, uncertain adopters, made evacuation and adoption more more selective. Rescue, adopt, repeat. Priority’s not only given based on urgency. But also domicile, and the qualification of the adopters. Consistent in campaigning for animal well-being. Doni has such strength of character wherever he is. He will still voice his big goal and mission. As long as he can contribute to animal populations, and anyone who cares about his/her environment. 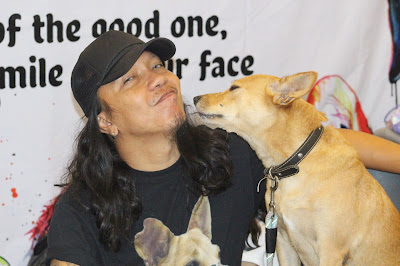 Doni Iblis (Doni The Devil) to doni animal defenders. A critic and scary face, to matronly heart, that’s how doni herdaru tona is known. From taking care of animals, to being an activist, from care to being a vegan. So many extreme musicians around the world care for, animal well-being and environment. Travis Ryan is one of them, as the leader of a band from San Diego, California – United States, Cattle Decapitation. He wrote lyrics to object to circuses using animals for the purpose of entertainment. What about other musician in Indonesia?